Mountz served on Kentucky Board of Education, and was a key player in 1990s education reform 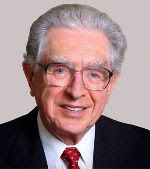 Wade Mountz, a leading citizen advocate in the effort to improve education in Kentucky over the past four decades, died at age 95 on Thursday in Louisville. Well-known as a prominent health care executive, Mountz was an active member and leader of the Prichard Committee for Academic Excellence. He also served on the Kentucky Board of Education from 1991 to 1996. His tireless advocacy for a greater focus on student achievement coincided with adoption and implementation of the Kentucky Education Reform Act of 1990.

“Today, the Prichard Committee mourns the loss of one of its founders,” said Prichard Committee President and CEO Brigitte Blom Ramsey. “Wade Mountz’s contribution to education reform was immeasurable. Kentucky led the nation in education progress in the 1990’s and a generation of Kentuckians are better educated because of Wade’s abiding commitment and dedication to the progress of the state he called home.”

When he and his wife, Betty, sent their two sons to school, Mountz became deeply invested in efforts to make sure Kentucky’s education system delivered far more for students. “Education existed for the teachers and administrators, and if the kids happened to learn, it was okay,” Mountz recalled in a 2014 interview.

Mountz was named to the Committee on Higher Education in Kentucky’s Future in 1979 — the group that later became the Prichard Committee for Academic Excellence. Mountz remained a steadfast leader and member from that time forward.

He was chair of the Prichard Committee from 1986-90, productive years that made Kentucky a national leader in education reform. In 1987, he gave a speech decrying the lagging momentum on improving schools that generated stories in newspapers across the state. The attention encouraged education advocates and seemed to strike a chord with legislators.

In 1989, education moved to the front page when the state Supreme Court issued a sweeping ruling in a school-finance case, finding the state’s entire school system unconstitutional. The following year, lawmakers passed the landmark Kentucky Education Reform Act of 1990, ushering in an era of school standards, accountability, an overhauled funding system, and major governance changes.

“We were carrying the flag,” Mountz said in 2014, recalling efforts of the Prichard Committee. “ I think it’s changed the world here in education, and it’s reflected in other areas of the country where they’re making changes. It points out what people of goodwill who work hard can make happen in this country.”

He became president of Norton Healthcare in 1969 and held that position until his retirement in 1988, after which he was named president emeritus. He served as chairman of the American Hospital Association in 1975 and earned numerous accolades for his civic service. He was inducted into the University of Kentucky College of Public Health Hall of Fame in 2007 and the Modern Healthcare Hall of Fame in 2008.  In 2012, the Rotary Club of Louisville honored him with its Lifetime Service Award.

A celebration of his life will be held at 11:00 a.m. Tuesday at St. Mark United Methodist Church, 4611 Lowe Rd., followed by internment at Cave Hill Cemetery with all family and friends invited.

In lieu of flowers, the family requests that memorials be made to the Norton Healthcare Foundation in support of the Wade Mountz Heritage Society, P.O. Box 950183, Louisville, KY 40295.

For more on Wade Mountz’s work with the Prichard Committee, click here.

The Prichard Committee for Academic Excellence is an independent, nonpartisan, citizen-led organization working to improve education in Kentucky – early childhood through postsecondary.

Since 1983, the Prichard Committee has worked to study priority issues, inform the public and policy makers about best practices and engage citizens, business leaders, families, students, and other stakeholders in a shared mission to move Kentucky to the top tier of all states for education excellence and equity for all children, from their earliest years through postsecondary education.

To send to multiple email addresses,seperate each email with a comma